Come along to a free screening and discussion of The Three Faces of Eve (1957) at Cinema City during Mental Health Awareness Week. The film screening is being delivered as part of a trailblazing UEA-led research project Demons of the Mind exploring the interactions between cinema and the psy sciences – psychiatry, psychology and psychoanalysis – during the late 1950s to mid-1970s. 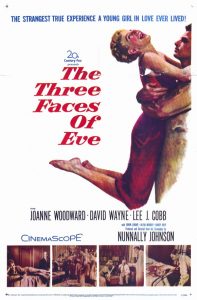 The Hollywood melodrama The Three Faces of Eve was based on a best-selling book by two American psychiatrists who worked with a client they diagnosed with ‘multiple personality disorder’ (now dissociative identity disorder) in the 1950s.

Following the screening there will be a short panel discussion between the Demons of the Mind project team and mental health professionals from The Pottergate Centre for Dissociation and Trauma and First Person Plural.