Across the ‘long 1960s’ period of the late-1950s to the early-1970s (Marwick 2005), opposing depictions of electroconvulsive therapy (ECT) and its apparatuses became a locus of controversy in escalating contention between the fields of psychiatric orthodoxy and the antipsychiatry movement. For example, the BBC were criticised for broadcasting both pro and anti-ECT propaganda after reports of spikes in numbers volunteering for or refusing ‘shock treatment’ following broadcasts of the Talk department’s The Hurt Mind (1957), produced with the leading UK mental health organisation The National Association for Mental Health (NAMH), and In Two Minds (1967), a Wednesday Play made in consultation with progressive (anti)psychiatrists R.D. Laing, Aaron Esterson and David Cooper. 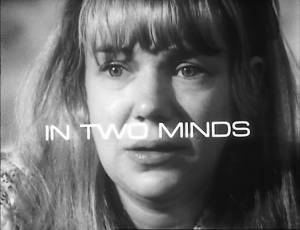 The Hurt Mind, broadcast in early 1957, was BBC and NAMH’s most ambitions intervention into mental health awareness. The five-part series was developed from preliminary BBC research into public attitudes to mental health, but was also used to conduct post-broadcast research to measure its ‘effects’. As NAMH minutes suggest, producer Andrew Miller-Jones intended the series to advocate for ‘physical treatments including the new method of ECT’, presenting it with an ‘un-alarming look’ that would have ‘a reassuring effect on the public’. This presentation of a staged ECT procedure – introduced as the ‘most important of these new methods’ by Dr William Sargant – is studio-based but edited and set designed to give the impression of an outside-broadcast (OB) from a hospital. The audience report stated, ‘the most striking [change] was a substantial increase in viewers’ confidence in the value of electric shock treatment’- a post-broadcast increase of almost 50%.

Ten years later, BBC drama In Two Minds employed the grammar of ‘built OB’ (Boon 2008) medical programmes – combining live outside broadcasts with telecine inserts – to challenge the hegemony of psychiatric orthodoxy and factual programming’s pretence to being objective and apolitical. Imitating and surpassing The Hurt Mind sequence, the drama fades from a lecture scene (shot at Middlesex hospital with David Cooper on-set) advocating for biomedical aetiologies and treatment of schizophrenia, to an ECT scene shot at Shenley hospital that sought to suture real and staged treatment footage as the dialogue from the lecturing consultant continued creating a synchresis between the two contexts. The scene ‘aroused misgivings’ in the BBC audience sample about British mental hospital treatment, provoked anger from establishment psychiatrists (Sargant in particular), and fuelled departmental contention within the BBC about generic boundaries and political partisanship.

This provocative ‘drama-documentary’ produced by Tony Garnett, directed by Ken Loach and written by David Mercer brought antipsychiatry’s challenge to the hegemony of biomedical psychiatric practices to a mass audience of 10 million viewers, but antipsychiatry also provided a medium through which Garnett and his contemporaries could challenge institutional hierarchies within the BBC. Much of the television play’s authenticity and affect came from its depiction of the dispassionate use of the ECT equipment; as the The Sun newspaper’s 2nd March 1967 review titled ‘Not so much a case history as a murder’ provoked: ‘A shocking play. Liable, like electric shock treatment, to dislocate the jaw’. The Science Museum’s psychology, psychiatry and anthropometry collection has been invaluable in identifying and historicising the apparatuses and instruments used within these texts, and in appreciating the significance of the material culture of mental health in understanding these historical media interventions. Key items from this collections have recently been curated in the Wellcome Medicine Galleries at the Science Museum, and can also be viewed online.